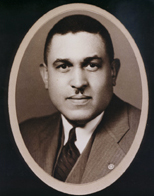 Chester K. Gillespie was born in Home City, a small town near Cincinnati. His family moved to Cleveland in 1909. Gillespie earned his law degree from Baldwin-Wallace College and practiced law for more than sixty years. A civil rights proponent long before the Civil Rights Movement of the 1950s and 1960s, Gillespie used his courtroom skills to argue for justice for African Americans. His legal practice was both interrupted and expanded by his work as a jurist, Republican politician, and businessman.

Gillespie began his career in politics in 1922 when he became Assistant Cleveland Law Director. During the decade from 1933 to 1943, he was elected to three terms in the Ohio House of Representatives. After this, he served in the U.S. Army during World War II. In 1963, he began a five year term on the Ohio State Board of Education, and in 1965 served as a presiding judge of Cleveland Municipal Court.

During his time in the House of Representatives, he eliminated racial language from a senate bill relating to the powers of the Boards of County Commissioners. Gillespie sponsored many bills and resolutions during his terms as legislator. Among these were a resolution urging the U.S. Congress to enact the Costigan Mob Violence Bill and a bill to enlarge the State Civil Service Commission. In 1933, he sponsored a bill that helped prevent racial discrimination by restricting the power of the Ohio State University Board of Trustees, and 1939, he sought to have congressional districts redrawn in order to make it possible for an African American to be elected to the U.S. Congress. Unfortunately, this measure died in committee.

Although a lifelong Republican, Gillespie expressed differences with Goldwater, Nixon, and Reagan. Gillespie walked out of the Ohio Caucus at the 1965 Republican National Convention because he was refused the privilege to speak against the delegation's support of Goldwater. He commented, "I cannot see how any Negro with self-respect can vote for Goldwater." However, upon returning home he cautioned African Americans to refrain from holding public demonstrations concerning Goldwater's nomination or civil rights issues, lest these actions be used to garner votes for Goldwater.

Gillespie used his political contacts and his own resources to provide much needed support for Central State University. Gillespie further served his community as a member of the Republican National Committee, the American Legion, and the National Association for the Advancement of Colored People.