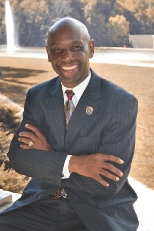 A product of a working class family, Senator Thomas was born in rural

Alabama in 1952. At the age of eight, his family moved to Cincinnati settling
into the West End community where he attended St. Anthony Catholic School.
After graduating from Withrow High School, he took a job as a public service
worker. However, with the desire to attend college he joined the Cincinnati
Police Cadet Program, which offered free college tuition.

Upon graduation from the University of Cincinnati, Senator Thomas joined the
Cincinnati Police Department where he spent twenty-seven years working throughout all 52 neighborhoods. In
1976, while on the force, Senator Thomas recognized that there was a lack of minority representation, especially in
policy-making decisions. He decided to take action to ensure that both African Americans and women received an
equal opportunity to serve and protect their community. As a result of his actions, the Cincinnati Police
Department increased the percentage of African Americans and women on the force to 40% under two federal
consent decrees.

Senator Thomas is a lifetime member of the Fraternal Order of Police and the Sentinel Police Association, member
of the Masonic Gothic Lodge 121, and serves as the Vice President of the Greater Cincinnati Chapter of the
National Action Network.

Senator Cecil Thomas has been appointed to serve as Ranking Member of the Senate Criminal Justice Committee
and State and Local Committee for the 131st General Assembly. In addition to his leadership roles, Senator
Thomas will also serve on the following committees: Education, Civil Justice, Insurance, Financial Institutions,
Finance Subcommittee on Education (K-12) and Finance Subcommittee on Higher Education.
He has been married to Pam Thomas for over thirty years. They have four adult children and four grandchildren.
They have resided in the community of North Avondale for the past thirty years.