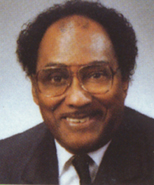 Casey Jones got his start in politics when he helped one of his teachers at Scott High School campaign for the office of state representative. After high school, Jones attended Knoxville College, an African American institution in Knoxville, Tennessee. There he played collegiate sports and earned a degree in physical education.

Jones, who had a passion for basketball and baseball, spent a short time playing amateur and professional sports. This period included a year with the Harlem Globetrotters and the New York Komedy Kings. Jones then returned to Toledo, where he worked as a senior recreation instructor and helped open the city's recreation centers. Jones remained in Toledo during World War II, working in area factories and the Lucas County Children's Center. Later, Jones was appointed personnel director for Lucas County.

Throughout his life, he was interested in politics. In 1968, voters elected him to the Ohio Legislature. He subsequently served as a representative from Toledo for twenty-five years. Jones served on the Finance, Financial Institutions, Rules, Appropriations, and Local Government Committees. However, in his early days in the House when the Neil House and Red Lion were favorite gathering spots for legislators, Jones avoided them. Instead, he stayed in his office studying. As a result, he was able to pass a number of state licensing tests, qualifying himself to pursue a second career in insurance. He and his wife Lovell worked hard to support and educate their nine children.

He is best known for his sponsorship of numerous bills relating to migrant labor, crime victims, and literacy. He initiated a bill to support the fight against sickle cell anemia and another bill requiring Ohio public schools to include the study of minority groups in their history, geography, and government courses. He is credited with the enactment of a law dedicating a section of Interstate 475 to civil rights activist Rosa Parks and with supporting legislation that led to the establishment of a holiday in honor of Dr. Martin Luther King, Jr. He put forward a bill to

allow people who are illiterate the opportunity to obtain a driver's license. He worked for additional state funding for Toledo's schools. He was also interested in dog racing and attempted to legalize the sport in Ohio.