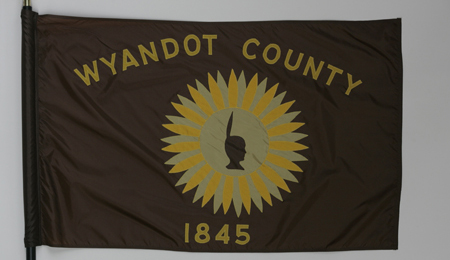 The Wyandot county Flag was officially adopted by the commissioners on September 22, 1975. It was designed by Mrs. Madeline Martin of Upper Sandusky, and was selected in a contest conducted by 4-H clubs during the summer of 1975. The brown background of the flag symbolizes the rich soil which attracted both the Native Americans and early settlers to this area. The sunburst was an important symbol in Indian culture and yet toady represents life and growth. The silhouette of an Indian brave serves as the main focal point and helps all of us focus on our heritage. The flag also carries the date Wyandot County was established, 1845, making it one of the last Ohio counties formed. The flag provides a symbol of our rich agricultural and historical heritage while providing us with a vision for the future. Just as we know the sun will encourage new life and continued growth, we know the people of Wyandot County will continue to meet the challenges of the future. The county is named after the Wyandot Indians, the last tribe in Ohio to cede their reservations in 1842.