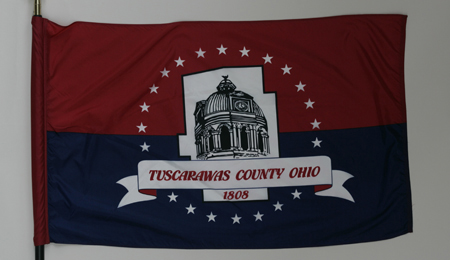 In 2001, County Commissioner Pancher assembled a Flag Committee which solicited ideas from the public. From the submitted designs, this red, white and blue entry was officially adopted on March 25, 2002. The flag was designed by Cathy Straub, and features the county courthouse dome within an outline of the county itself. Encircling the courthouse image is a circle of white stars representing each of Tuscarawas County's twenty-two townships. This part was devised by Straub's thirteen year-old son Bryan. Tuscarawas County was established in 1808, and named for the Tuscarawas Indian Tribe.