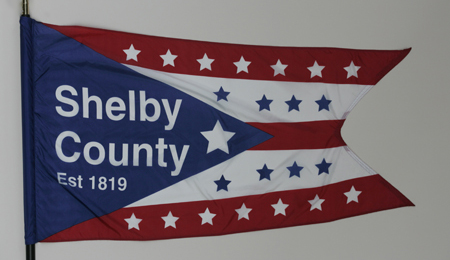 In honor of the 200th birthday of the State of Ohio, this flag was designed to reflect upon the geography of Shelby County. Its shape is a burgee in the pattern of the Ohio State Flag. The red and white stripes are symbolic of the county's many roadways and waterways, including the Miami-Erie Canal. The blue field represents the rich, fertile land from which our ancestors once thrived, and which continues to be a vital part of our livelihood. The large white star stands for the county seat Sidney, the only city in the county. The white outer stars on the red background represent the fourteen townships, while the blue stars on the white background signify the county's eight incorporated villages. Shelby County was established in 1819, and named for Revolutionary War hero Isaac Shelby who was the first Governor of Kentucky.