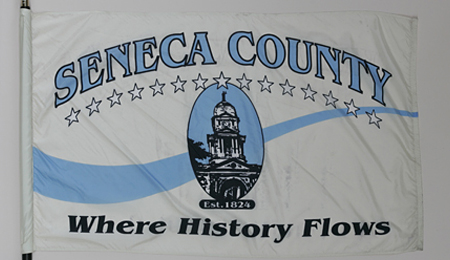 The Seneca County flag was designed by Tonia Hoffert, director of the Seneca County Museum, at the request of the county commissioners. It was adopted on February 10, 2003. The design of the flag is to represent the county's history, and the antique white color symbolizes the past. Blue stands for the Sandusky River, an influential geographic feature which divides the county into two nearly equal parts. The shape of the flag is much like the shape of the county, which is almost a perfect rectangle. The phrase, "Seneca County where history flows" was chosen in honor of all the history along the Sandusky River and the beginning of the county. The Seneca County courthouse appears in the center of the flag because Tiffin is the county seat, and the courts represent the balance of state and local laws. The white stars represent the fifteen townships. The county was organized on January 22, 1824, and was named after the Seneca, a tribe of Native Americans.