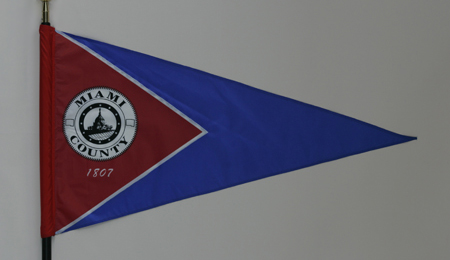 This red, white and blue flag is in the shape of a triangular pennant. In preparation for the Ohio State Bicentennial celebration, it was designed in 2002 by a committee that included Jim Oda and 15 other people. The County Seal is a featured element. Within a circle appear the County Courthouse, outlines of the county shape and twelve white stars. The stars stand for the county's twelve townships. Miami County was established in 1807 and was named after the Miami Indians.