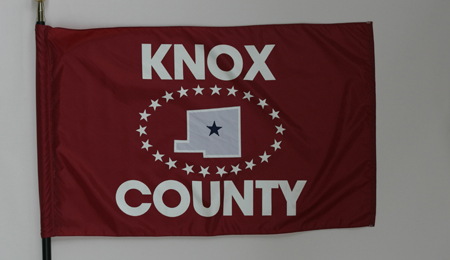 In 1985, a flag design contest, sponsored by the Knox County Board of Commissioners, resulted in 437 entries. The winning flag was designed by the students of Karen Robison's fifth grade class at Danville Intermediate School. It was officially adopted on September 23, 1985. This red flag shows a white outline of Knox County's shape. The county seat, Mount Vernon is marked with a blue star. The map is surrounded by an oval of white stars which represent the twenty-three townships. Knox County was established in 1808. It was named after General Henry Knox, the first U.S. Secretary of War.