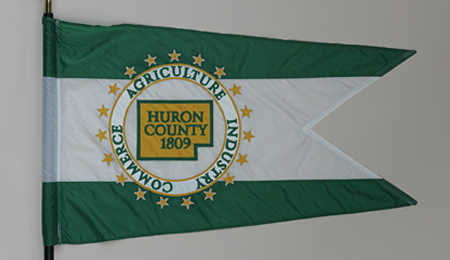 The Huron County flag is a composite of four winning design entries from a contest that was open to all residents of Huron County, in 2002 to design a county flag. The winning entrants were as follows: Celeste Wiedemann of Norwalk; Meredith Hackathorn of Monroeville; Gerri Parker, of Wakeman; and Huron County Clerk of Courts, Kathleen Walcher, of Norwalk. The flag was adopted by the Board of Commissioners on July 16, 2002, and after more than a century after the founding of Huron County the new flag was unveiled on September 10, 2002 to honor the state's forthcoming 200th birthday. The Huron County flag is a "burgee", which pays tribute to the shape of the Ohio's state flag. It is tri-colored, with two hunter green stripes, separated by a white stripe. Atop the stripes is a circular logo with the words "AGRICULTURE-INDUSTRY-COMMERCE" imprinted, which represents the county's economy. In the middle of the circular you will find a gold Huron County outline with "Huron County 1809," the date it was established. On the outside of the circle, gold stars represent the nineteen townships within the county. Huron comes from the name used by the French for a local Wyandot tribe of Native Americans.