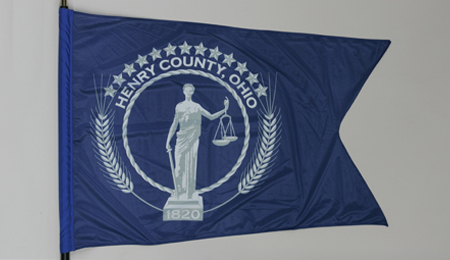 In conjunction with Ohio's Bicentennial celebration, a contest was held to design a Henry County flag. Citizens of all ages and backgrounds submitted designs, which were judged by representatives from the Henry County Historical Society and Henry County Arts Council. The winning flag was designed by 21-year-old Elliot Geno of New Bavaria, a student at Defiance College. Geno started with the idea to entwine several county symbols on a flag that is the same shape as the Ohio State flag. He wanted a traditional looking flag, because he sees Henry County as traditional. The flag centers on Lady Justice, which is a statue on top of the county courthouse. Ropes remind us of the canal along the Maumee River. Wheat symbolizes the agricultural industry. White stars represent the county's townships. The county was established in 1820, and named for Patrick Henry of the Revolutionary War.