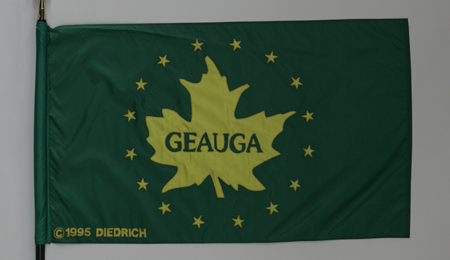 This green flag is called, "Stars and Maple Leaf." It was chosen in a county-wide contest during Ohio's Sesquicentennial. 15 year old Ray Diedrich from Chardon designed it in 1953. The golden maple leaf stands for the maple-sugar industry and annual Maple Festival. Gold stars are for the sixteen townships. The name "Geauga" comes from a Native American name for Grand River, and the word means "raccoon." Flag expert John Purcell provides this further history as reported in The Cleveland Press: In 1978, the incumbent commissioners, who claimed nobody remembered the "old" flag, held another contest for a county flag, which was won by 12-year-old Beth Berkobein, a Russell elementary school student. That flag had a red field, with a raccoon placed on a large maple leaf in the center. Across the top, COUNTY OF GEAUGA appeared; across the bottom, CLOSE TO NATURE was written (colors of the images or letters not specified). When the announcement was made that this would be the new county flag, the Geauga Maple Festival Board protested, saying that the earlier flag was actually the official one, even though none was extant, and hurried to have one made. The commissioners of 1978 declared they would have the new flag, and Commission Chairman Richard C. Ford said he would have several hundred of them made. Whether this ever happened, is not known, but the 1953 flag apparently won the day. We have no image of the red flag.