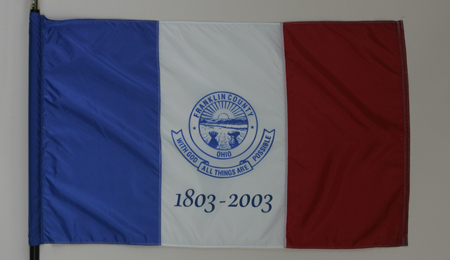 This flag was adopted by Franklin County on April 30, 1987. This red, white and blue flag is reminiscent of the French Flag, and also of the flag of the City of Columbus, which is the county seat. The seal of Franklin County is printed blue on white in the middle. The picture and the motto are the same as those used by the State of Ohio, and remind us that state government is centered in Columbus, Ohio. Franklin County was established in 1803 with the birth of the state. Both celebrated their bicentennials in 2003. The county was named after founding father, Benjamin Franklin.