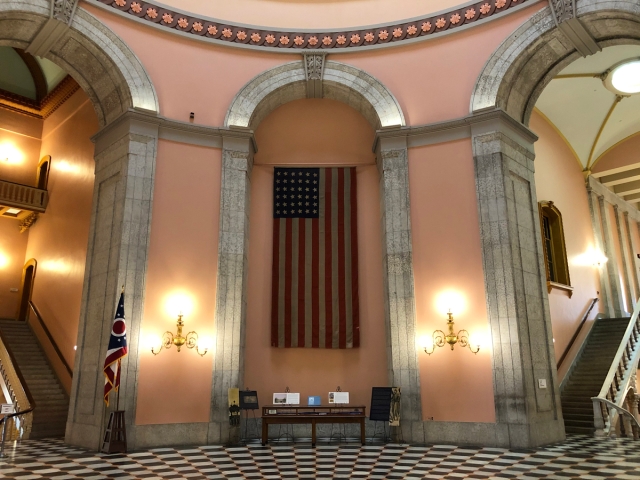 The Capitol Square Review and Advisory Board (CSRAB) welcomes the return of the Thirty-Six Star flag that flew over Capitol Square during the repose of President Abraham Lincoln, on April 29, 1865. The flag originally was presented to David Nevin Murray of Portsmouth, Ohio for his contributions to the war effort on behalf of the Union Army during the American Civil War.

Since then, Murray and succeeding members of his family lent the flag for parades, memorials, and special events, including the inaugurations of Governor John W. Bricker and Governor Frank Lausche at the Ohio Statehouse. In 1945, the flag hung in the Ohio Statehouse Rotunda as a memorial for President Franklin D. Roosevelt.

Included in this display is an exhibit of artifacts related to the Lincoln funeral journey on loan from the descendants of Brig. General John C. Caldwell, a member of the Guard of Honor on Abraham Lincoln’s funeral train in 1865.
[Update, 6-1-2020.] A historic 1865 newspaper from the time of Lincoln's death can be seen in the display. It is on loan from Ray DiRossi, a staff member for the Ohio Senate.
The Ohio Statehouse is open to the public during working hours. Social distancing and face coverings are encouraged. Guided tours have been postponed until further notice. The Ohio Statehouse is closed on Memorial Day and on state holidays.